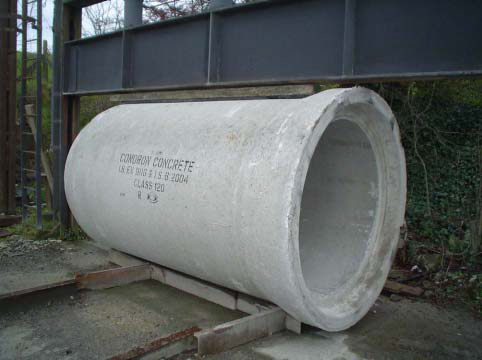 The forces acting on a cross section of pipeline arise from four main sources.
1. Weight of overlying fill.
2. Soil pressures transmitted to the pipe from surface loads i.e. traffic and other transient loads.
3. Supporting reaction below the pipe.
4. Water within the pipe (only significant for larger diameter pipes).

Design tables for condition 1 are supplied in the bedding Class / depth of cover tables. For conditions as stated in 2, 3 & 4 special design considerations apply and consultation may be required. It is structurally critical if trench width on site exceeds the designed trench width. Trench width should be inspected and recorded regularly. A trench adjacent to a manhole may need to be wider but this should be taken into account at design stage.

The Irish Standard Specification for Concrete Sewer Pipes, I.S.6: 2004 gives minimum crushing test loads for each diameter of pipe. Loads are applied in a three edge-bearing test described in the standard. Hydraulic tests are also carried out, by applying an internal hydraulic pressure of 0.5 bar to test for porosity. We also employ a 100% gauging system of our Spigots and Sockets to ensure watertight joints to 10m head of water.

In the three edge-bearing test, the vertical loading and supporting reactions are line loads. The strength of the pipes determined in the crushing test is multiplied by a bedding factor (Fm), which represents the amount by which the stresses in the pipe are reduced because of the spreading properties of the bedding for load and reaction.
The value of bedding factor (Fm) for a particular method of construction is not a precise figure but is affected by the quality of workmanship. The figures given are assuring a good standard of workmanship. Pipe settlement will be kept to a minimum by the proper selection and compaction of the bedding material. The bedding should be compacted to a density not less than that of the natural soil in the sides and bottom of the trench. The bedding material should be of a similar particle size to that in the trench sides. Where the ground is clay or silt, bedding material must consist of all-in gravels to prevent the trench from becoming a drainage channel and thus carrying away fines from the trench walls and bedding and causing settlement of the pipes. Rounded single size material is not recommended. The bedding directly beneath or above the pipeline must not be over compacted; otherwise line loading of the pipes will result. Research and long experience has shown the following rule of thumb to be acceptable with a maximum of 40mm and limit on fine sands.

It is advisable that pipes laid under roads should have cover over the pipe of not less than 1.2m. Pipes laid with less than 1.2m cover require special consideration. For pipes laid in fields a minimum cover of 0.6m should be provided. At shallower depths there is a risk of damage from agricultural operations.

The required crushing strength of a concrete pipe can be calculated using the following equation.

Depth of cover tables are provided for I.S. 6: 2004 Minimum Crush Strength and give a simple guide to maximum depth of cover for different bedding classes for single pipelines laid in a narrow trench. The density of fill is taken as 19.6kn/m³. This value is suitable for general design purposes and is unlikely to be exceeded in normal practice.

The general requirements of I.S. EN 1295 – 1: 1998 `Structural Design of Buried Pipelines’ must be followed. Under no circumstances should blocks or bricks be placed beneath pipes and special care should be taken with material immediately surrounding the pipeline to minimise the possibility of large size lumps of rock, hardcore etc. coming into direct contact with the pipe and thus causing point loading. With a Socketed pipe care must be taken to ensure that adequate clearance is given beneath the Socket. Uniform support along the pipeline is essential. Where pipes are installed in soft ground the thickness of the lower bedding may need to be increased to prevent excessive settlement of the pipeline.

To allow for unexpected site conditions a minimum factor of safety of 1.25 should be allowed on the calculated external loads.

Narrow trench conditions – the assumed widths are given in the depth of cover charts. 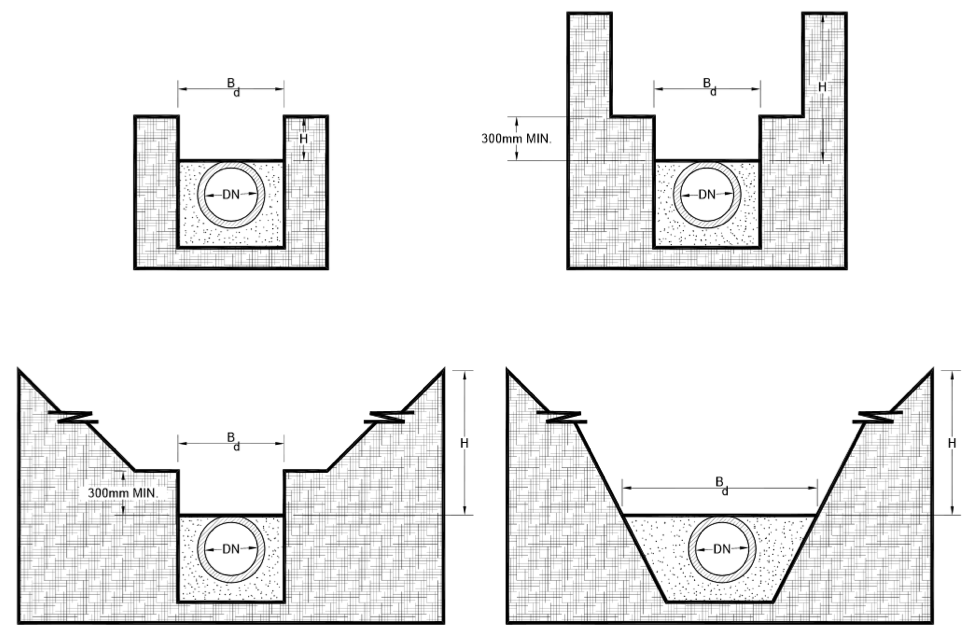 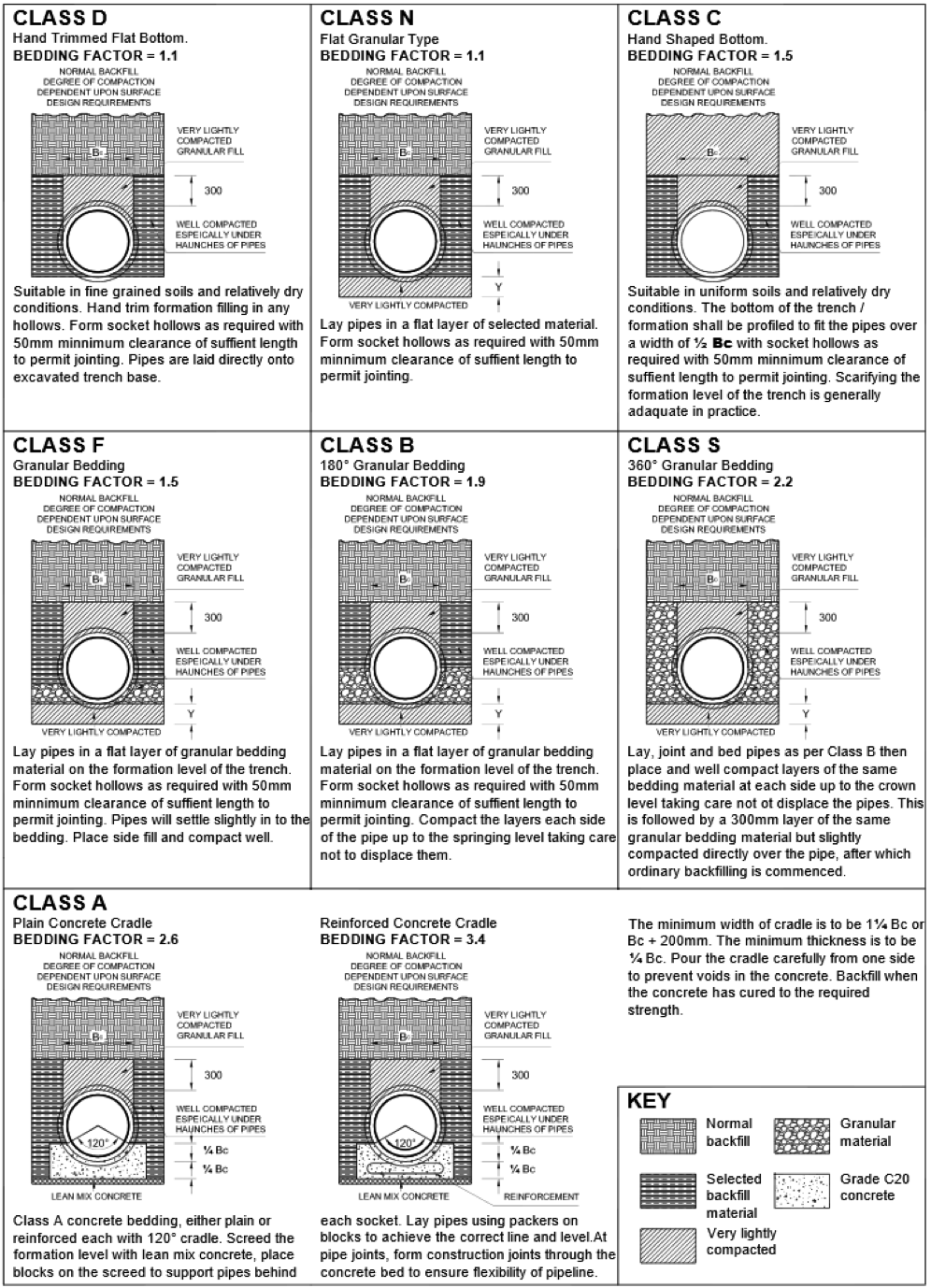 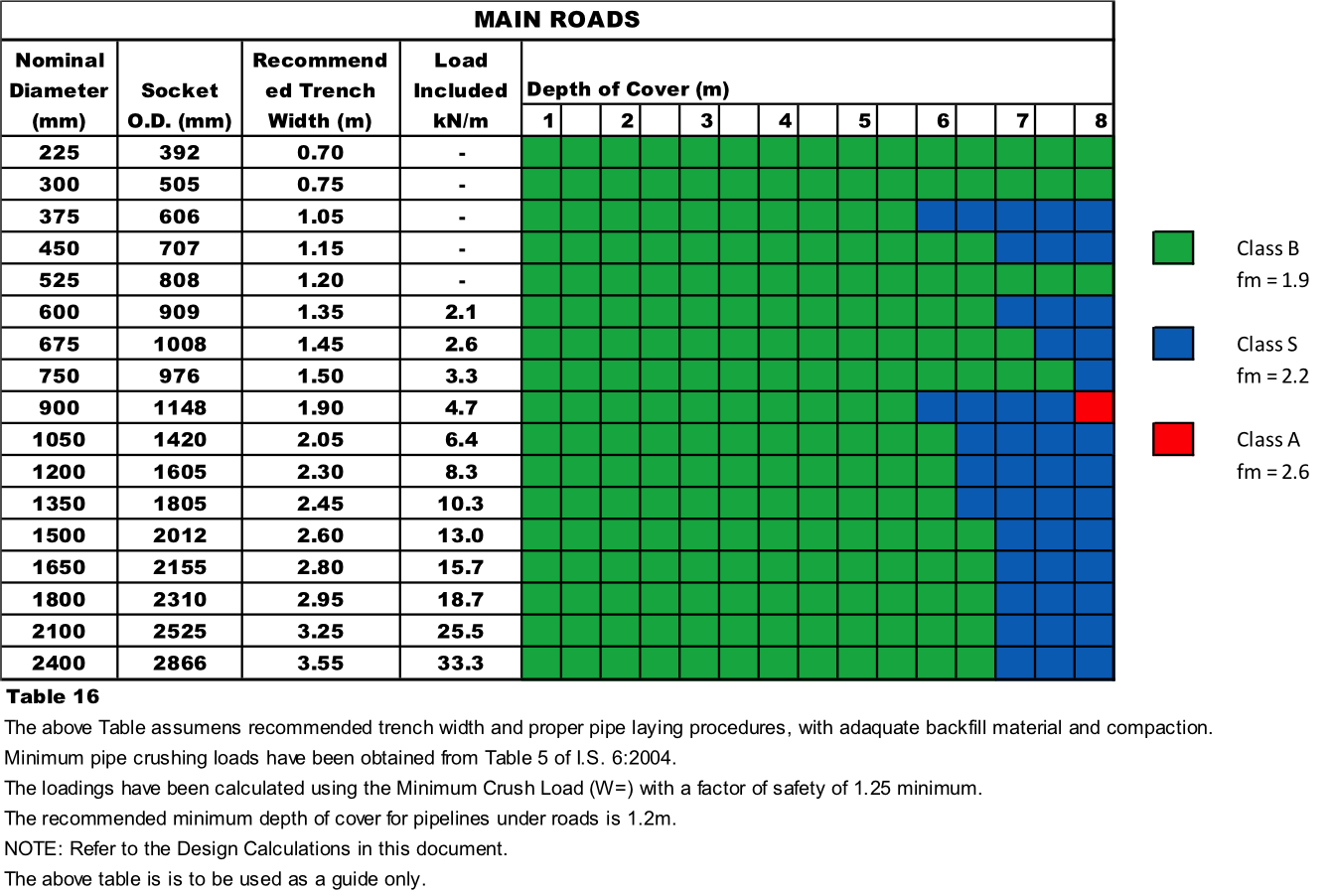 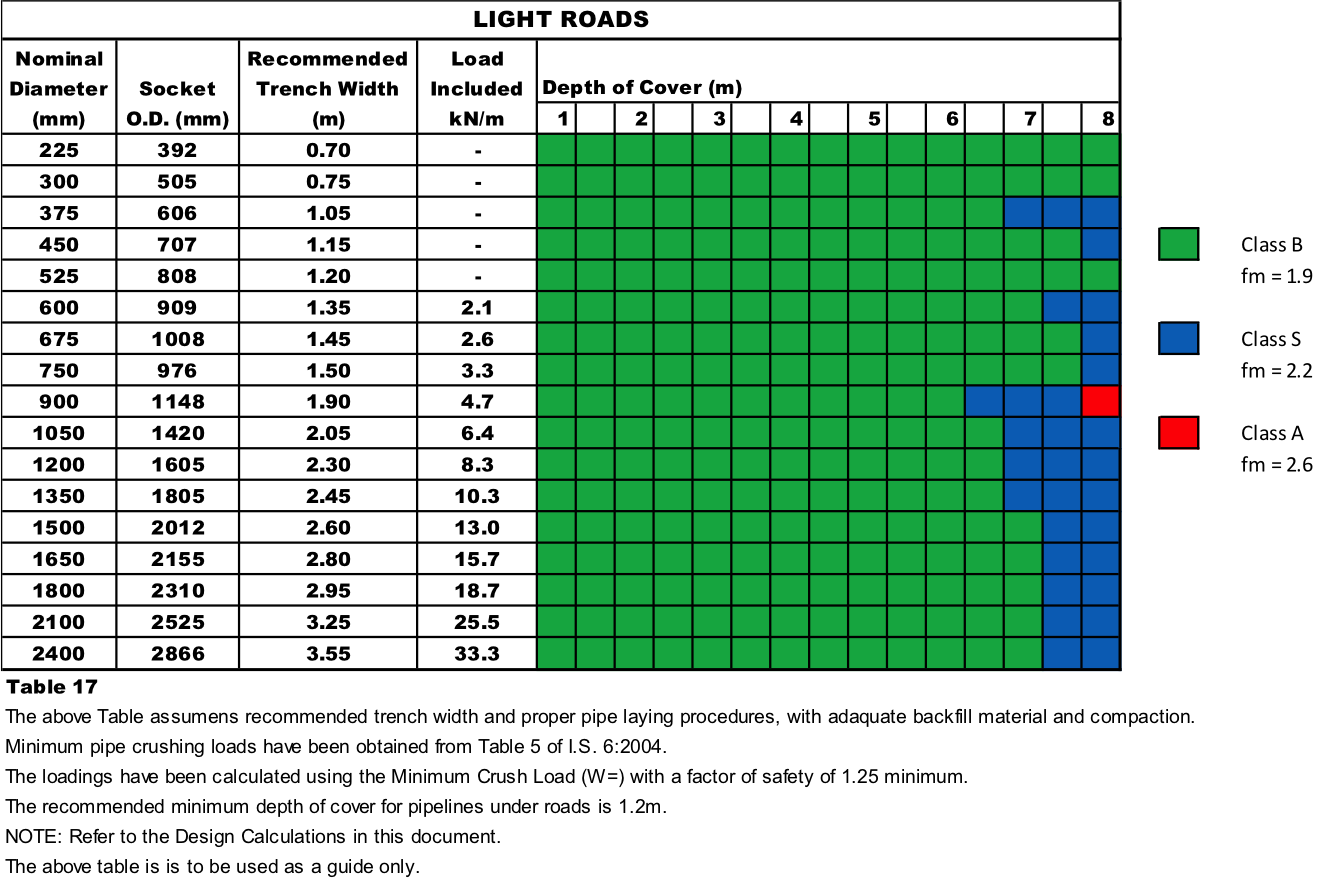 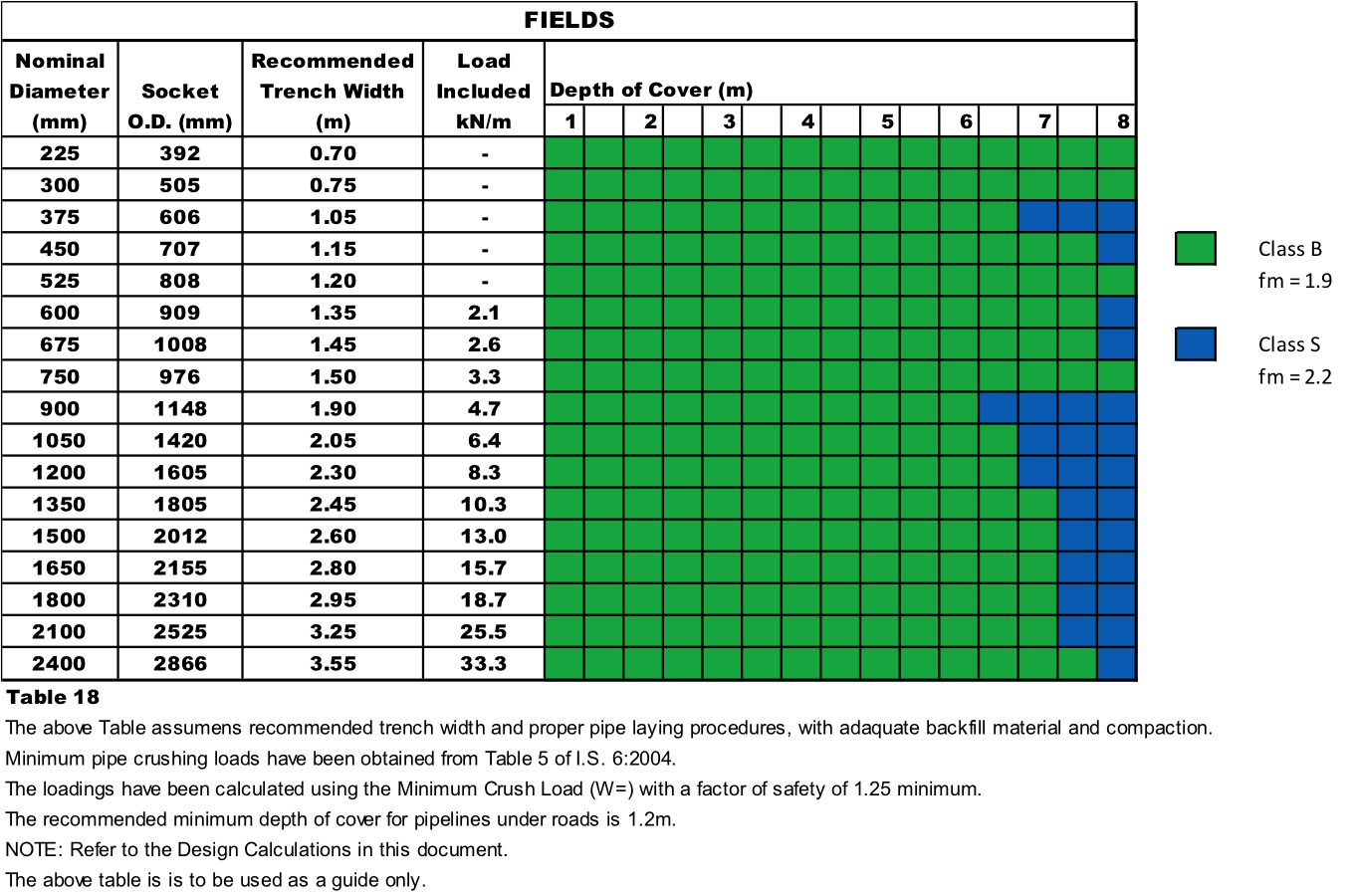 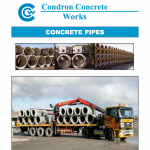